NLIHC’s Annual Housing Media Award is presented annually to journalists who make a special contribution to highlighting housing inequities of the lowest income people in America. The 2015 award was presented to journalists Mikel Livingston and Steven Porter for their series, “The Great Chicago Migration Myth,” published in the Lafayette Journal & Courier during October and November 2014.

“The Great Chicago Migration Myth” analyzes a long-held belief in Lafayette, IN that thousands of low income black families, after receiving housing vouchers as a result of the demolition of public housing in Chicago beginning in 1999, packed up their belongings and migrated to Lafayette, bringing with them increased crime, drug use, and burdens on local social services. Livingston’s and Porter’s series show that there is no substantive evidence that such a migration occurred, that the data demonstrate that most former public housing residents stayed in Chicago, and that beliefs about a migration are founded on racial and social fears and prejudice. “This was not an advocacy piece, it was an education piece,” said Mikel Livingston. “We wanted to get the data out there and get people talking. It’s a continuing dialogue,” added Steven Livingston. The series, “The Great Chicago Migration Myth,” can be found at: http://www.jconline.com/story/news/2014/10/17/truth-black-white/17293817/

The Campaign to Take Back Vacant Land is a broad coalition of 47 community organizations led by the Women’s Community Revitalization Project, Liberty Resources, and Disabled in Action. The campaign worked to ensure that the new Philadelphia Land Bank legislation contained provisions for accountability through community representation on the Land Bank’s board and for transparency through public access to all Land Bank transfers of land.

“At CHP, our tenants were reporting that it was hard to find housing and work because of background checks. Our social workers were having challenges in getting clients housing. When our partners approached us to work on this campaign, it was a natural fit.”

Congratulations to all of the NLIHC 2015 Honorees. 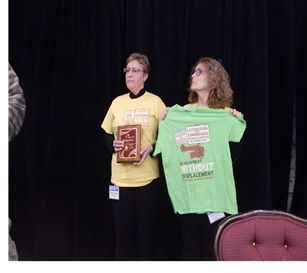