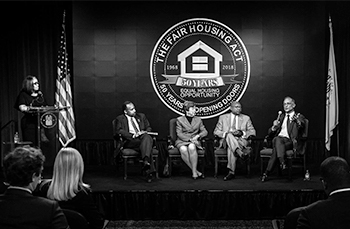 The Fair Housing Act prohibits discrimination in the sale, rental, and financing of housing based on race, color, national origin, religion, sex, familial status, and disability. The act has two main purposes—prevent discrimination and reverse housing segregation. The part of the law that calls for the reversal of segregation is necessary because decades of unjust government practices have led to the presence of housing segregation today. Research shows that people of color are most likely to live in neighborhoods with limited access to good jobs, healthy food, adequate schools, and other resources needed for success. Jurisdictions enforcing desegregation is one way to work towards a more integrated society where everyone has equal access to opportunity.

Since the passage of the Fair Housing Act, people have brought many cases of housing discrimination to court and have won those legal battles. There has also been an increase in accessible housing available to individuals with disabilities. And recently under the Obama administration, the definition of fair housing enforcement expanded.

Though we have made some progress, many challenges to fair housing remain. There are still extreme racial disparities in homeownership and wealth. In 1968, 65.9% of white families owned their homes, a rate that was 25% higher than the 41.1% of black families that owned their homes. Today, the black homeownership rate has not changed, while the rate of white homeownership has increased five percentage points to 71.1%. These homeownership disparities contribute to the shocking racial wealth gap in America. In 2017, the typical white family held ten times the amount of wealth as the typical black family ($171,000 for whites to $17,409 for blacks, on average). These numbers have worsened since 1968 and point to the fact that housing discrimination continues to determine life outcomes.

In 2017 more than 28,000 complaints of housing discrimination were filed across the country. Some of these complaints resulted in lawsuits against cities, banks, and landlords for discrimination in housing and lending. While some cases were reported and sanctioned, others went unreported.

The changing political landscape is also a major challenge. Protecting fair housing was once a bipartisan effort, but political support for this goal has decreased in recent decades. Under the Trump administration and the direction of Secretary Ben Carson, HUD has ignored its responsibility to enforce antidiscrimination policies and actively work towards integration.

There are actions we can take as housing advocates to create a society that is less discriminatory and more integrated:

As activists who fought for the civil rights protections of the 1960s said, the road to justice is long and freedom is a constant struggle. It has been 50 years since the passage of the Fair Housing Act and while we have made progress that is worth celebrating, we have more work to do. We must work to end discrimination in housing because everyone deserves equal access to a safe, decent, and affordable home. We must work towards integration and creating a society in which where one lives does not determine one’s outcomes.

Together, we continue the fight.

This piece was created with research from the National Fair Housing Alliance’s “2018 Fair Housing Trends Report.”

NLIHC released today a new brief, “Promoting Housing Stability through Just Cause Eviction Legislation.” Just cause – also known as “good cause” or “for cause” – eviction laws are legal protections…

NLIHC Releases The Gap: A Shortage of Affordable Homes

NLIHC released its annual report The Gap: A Shortage of Affordable Homes, finding the lowest-income renters in the U.S. face a shortage of approximately 7 million affordable and available rental…