President Donald Trump’s Fiscal Year 2019 budget request proposes deep cuts to housing benefits that help millions of people afford their homes, including low income seniors, people with disabilities, families with children, veterans, and other vulnerable households. The proposal — unveiled less than two months after the president signed into law $1.5 trillion in tax cuts for wealthy individuals and corporations — would take away housing benefits from the lowest income people by slashing federal investments in affordable homes, increasing rents, and imposing harmful work requirements on America’s struggling families. If enacted, it could leave even more low income people without an affordable home, undermining family stability, increasing evictions, and leading to more homelessness. 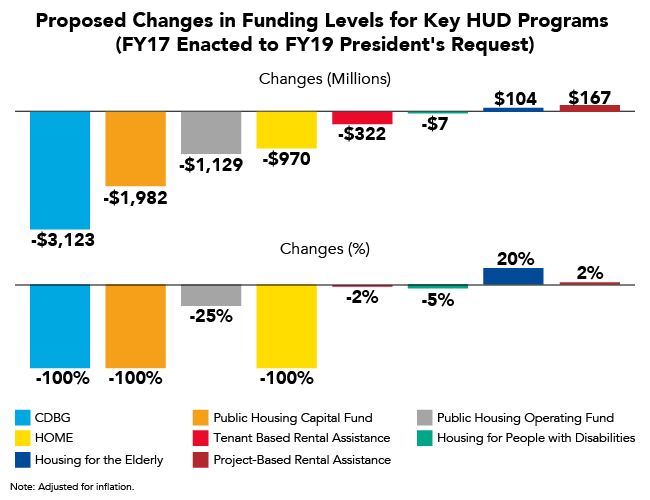 Overall, the administration cuts the budget for the Department of Housing and Urban Development (HUD) by $6.8 billion. The cuts include eliminating several programs that increase access to affordable housing and prevent homelessness.

Mr. Trump’s budget request shows a lack of understanding for the critical need for affordable housing options. Congress will make the final call on funding levels, and NLIHC urges them to not only reject the White House’s proposal, but to increase investments in programs that help families and communities thrive.

At a time when the affordable housing crisis has reached new heights, and homelessness is increasing in some communities, the president proposes to fully eliminate essential housing and community development programs, like the national Housing Trust Fund, Community Development Block Grants, the HOME Investments Partnership Program, and the U.S. Interagency Council on Homelessness. The backlog of public housing capital repair needs is upwards of $40 billion, but the Administration proposes to entirely eliminate federal funding for capital repairs and slash funding to operate public housing.

In addition to ending crucial housing programs, the budget does not provide sufficient funding for the Housing Choice Voucher program. NLIHC estimates that the proposed cuts would lead to a loss of 200,000 vouchers. The administration also reduces funding for vouchers for people with disabilities by $13 million and provides no funding for new HUD-Veterans Affairs Supportive Housing (VASH) vouchers, other than a small amount targeted to Native Americans.

The budget also supports cutting housing benefits for some of America’s lowest income people by increasing rents and imposing work requirements on current and future tenants. While HUD plans to send its proposal to cut housing benefits to Congress in March, we expect it will be substantially similar to draft legislation that was leaked in recent weeks.

The proposed changes would hurt tenants already scraping to get by and would make it more difficult for them to achieve financial stability and live with dignity. The draft legislation proposes to increase rents on most non-elderly, non-disabled families by requiring that they pay 35% of their gross income, compared to 30% of their adjusted income currently. The very poorest elderly and disabled families would also see their rent increase to 30% of their gross income or $50, whichever is higher. This proposal would eliminate income deductions for medical or childcare expenses for all households, primarily impacting seniors, people with disabilities, and families with children. It sets a new mandatory minimum rent for households assumed to be able to work at more than $150 – or three times more than its current rate.

The budget proposal also allows housing providers to broadly impose work requirements, without any resources to help people gain the skills they need for well-paying jobs. Despite research proving that work requirements are ineffective and harmful, households could be required to work up to 32 hours per week per adult, even if an adult is a primary caregiver of a young child or adult relative who requires assistance. The draft bill limits “work” to employment, vocational training, or education—but only schooling that leads to a degree or certificate. This excludes volunteer work or training and apprenticeships that do not lead to a certificate. It may also exclude time spent searching for a job or receiving addiction or mental health treatment.

President Trump signed the “Tax Cuts and Jobs Act,” this past December. While the bill does provide tax cuts, the majority of the benefits go to the wealthiest 1% of taxpayers. By reducing the amount of taxes high earners and corporations pay in to the government, this bill will increase the country’s debt by over $1.5 trillion over the next decade. Higher national debt puts important housing and social programs at risk of spending cuts; lawmakers may attempt to reduce the debt by cutting funding for programs like Medicaid, Medicare, Supplemental Nutrition Assistance Program (SNAP or food stamps), and affordable housing and homelessness prevention programs.

The bill does keep important tax credits, such as the Low Income Housing Tax Credit (Housing Credit), that encourage private companies to build affordable housing. It does not, however, include any improvements to the credits. In fact, because the bill lowers the tax rate for corporations, the Housing Credits are less valuable to investors. Although Republican lawmakers who drafted the bill included several changes that would save the government money, these savings are only used to counterbalance the tax cuts to billionaires and corporations. The budget President Trump proposed in February already shows the impact of the tax bill. He included massive spending cuts to important programs that help reduce poverty. His officials explained that the tax bill would help families so much that these programs would no longer be necessary. This explanation ignores both the evidence and the realities families face every day.

Republicans in the U.S. House of Representatives are reportedly discussing a potential short-term suspension of the debt ceiling to buy more time for debt ceiling negotiations. While a plan has not…

NLIHC released Advancing Housing Justice in the 118th Congress, a memorandum addressed to the new Congress outlining the ongoing need for federal investments in affordable, accessible housing and the…